Since 2011, we have specialized in assisting start-ups through the company Startupbootcamp, a worldwide network of start-up accelerators. The founders Ruud Hendriks and Patrick de Zeeuw believe strongly in the importance of the start-up team. Harvard studies also have shown that most small companies fail because of arguments within the team. It is important for the founders and shareholders to avoid conflicts. Given that Ruud and Patrick have benefited personally from a couple of mediation conversations a year as business partners, they want to give the companies they invest in, that support too.

Start-ups have specific dynamics and face specific issues. Thanks to the pre-mediation and mediation conversations we have conducted at Startupbootcamp, we are well informed about issues such as the allocation of shares among the founders, differences in commitment between the founders and other team members, team dynamics, the allocation of roles and differences in leadership styles.

We always work with two mediators when assisting start-ups. We are unlikely to overlook important aspects for the team thanks to our diverse backgrounds (the legal profession, organisational psychology, entrepreneurship, tax and journalism) and styles (reflective and confrontational).

At present, we are assisting start-ups in the fields of e-commerce, smart cities and living, fintech and the Internet of Things.

Roelof spoke as a mediator at The Week of the Entrepreneur in Utrecht. He talked about pre-mediation, a phenomenon that is relatively new in the Netherlands. The response was positive. One of the visitors even said, “What a brilliant idea — sitting down with a pre-mediator on a regular basis!” 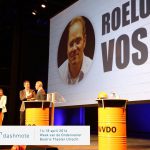